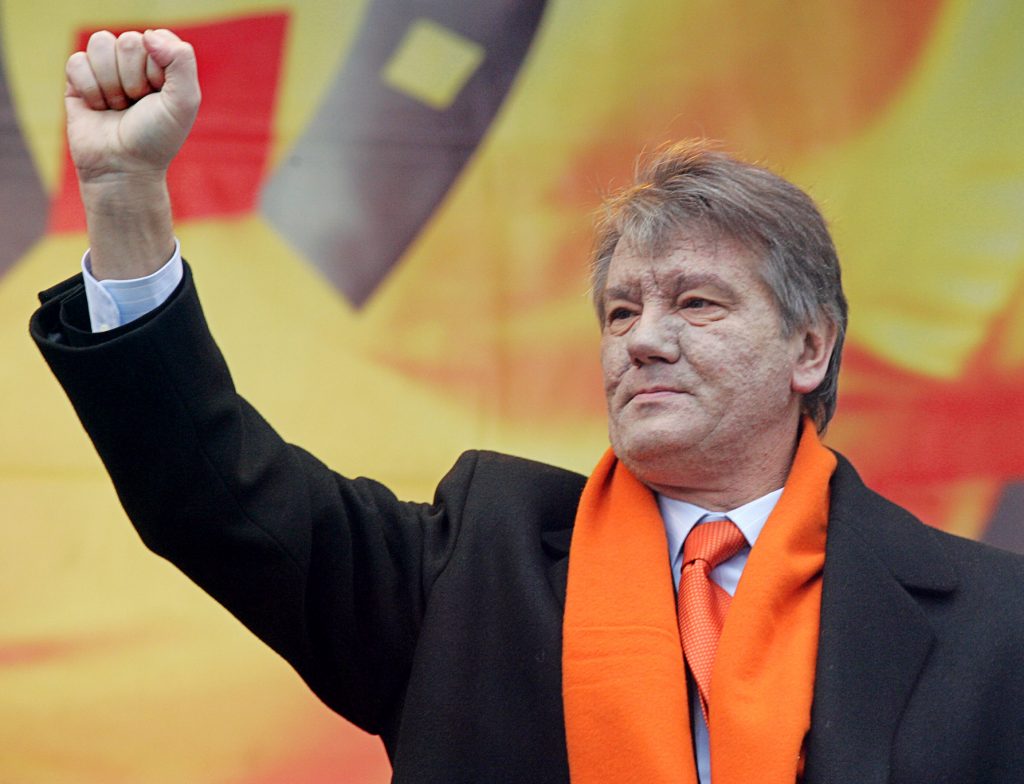 The original article can be found here – https://www.atlanticcouncil.org/blogs/ukrainealert/rethinking-yushchenko/

“He plants trees which will be of use to another age,” said the Roman poet Caecilius Statius. This phrase captures the idea of a far-sighted leader who is focused on the distant future beyond their own lifetime. As Viktor Yushchenko celebrates his sixty-seventh birthday this week, those words may well be applied to Ukraine’s much maligned and often misunderstood third president.

As someone who has done extensive focus group work in Ukraine since 2004, I can confirm that Viktor Yushchenko conjures up very mixed emotions. Whenever I have asked Ukrainians for their impressions of Yushchenko, the most common responses range from nostalgia for the Orange Revolution to bitter disappointment. No leader before him ever inspired Ukrainians quite like Yushchenko. None dared them to hope. However, with great hope comes great expectations.

When Yushchenko took office in early 2005, he did so on a tide of history and high drama. In the previous few months, he had survived a poisoning attempt, campaigned across Ukraine, led national protests over a rigged presidential election, and ultimately won a rerun second round of voting as the world’s media looked on in amazement.

Expectations were astronomical. From Day One, his presidency was proclaimed as the end of tyranny and the start of Ukraine’s procession towards membership of the European Union.

However, not everyone was taken in by the euphoria. More prudent observers remembered Churchill’s quote after the battle of El-Alamein in 1942. At the time, the British war leader had sought to dampen expectations by commenting, “This is not the end. It is not even the beginning of the end. But it is, perhaps, the end of the beginning.”

More than a decade since he left office, it is now painfully apparent that Yushchenko’s presidency marked only the end of the beginning in Ukraine’s arduous path towards Europe. It was in Yushchenko’s term as president that the country began to develop genuine democratic traditions and distance itself from the authoritarian political culture of the post-Soviet space. During this five-year incubation period for Ukraine’s fragile democracy, freedom of the press and the right to fair elections were properly cultivated and strengthened.

The Orange Revolution, which Yushchenko led in 2004, was about Ukraine making the choice to be Ukrainian and not Russian. A decade later, the Euromaidan Revolution was about Ukraine choosing European civilization over the Eurasian alternative favored elsewhere in the former USSR.

It is clear that without the Orange Revolution, there would have been no Euromaidan. Ukraine’s civil society, media, and political cultures would not have been sufficiently mature to prevail over the tyranny of the Yanukovych regime.

One of the most frequently cited criticisms of Yushchenko is the myth that he facilitated the return of Viktor Yanukovych to power, first as prime minister in 2006, and ultimately as president in 2010. In 2006, Yushchenko merely obeyed his constitutional duty by submitting the nominee of parliament for consideration. No one cheers the flawed Ukrainian Constitution, but democratic norms require adherence to the law even when it is not in one’s own self-interest to do so.

In 2010, when Yanukovych defeated Yulia Tymoshenko to win the Ukrainian presidency, Yushchenko chose to endorse neither candidate. He did so with the confidence that he had raised up a nation that was now capable of defending its rights without the need for a lone leader to rally them. Yushchenko planted and cultivated the tree of Ukraine’s democracy.

This was not the only tree that Yushchenko planted in the knowledge that another leader in the years to come would reap the benefit. The Ukrainian Orthodox Church received its independent recognition just over two years ago, but it was Yushchenko who first promoted this idea, and nearly succeeded in achieving it, back in 2008.

Today, local governments are enjoying the benefits of decentralization, but it was Yushchenko’s administrative and territorial reform attempt in 2005 that was the blueprint for this success.

In the last month, Putin’s main Ukrainian ally, Viktor Medvedchuk, has been targeted with a series of government sanctions. However, it was Yushchenko who was courageous enough to first make him persona non grata at a time when Medvedchuk’s power in Ukraine was far greater than it is now.

When Russia invaded Georgia in August 2008, it was Yushchenko who flew to Tbilisi to encourage the Georgians and warn the world that Ukraine was next. Six years later, his warning came true.

In the American Wild West, there was a saying that “the pioneers take all the arrows.” Yushchenko’s fate is a reminder that in the Wild East of Ukraine during the 1990’s and 2000’s, the situation was no different.

Economically, Yushchenko left his indelible mark on the country’s history long before he became president by launching the hryvnia currency. He also brought inflation down from 10,000 percent to single digits and became the first prime minister to pay state salaries on time.

As president, he conducted the most profitable privatization in Ukraine’s history. The 2005 sale of Kryvorizhstal brought in more money (USD 5.6 billion) to the state budget than all previous Ukrainian privatizations combined.

Even more importantly, GDP grew by an average of five percent annually during the first four years of Yushchenko’s presidency. This was fueled by tens of billions of dollars in foreign direct investment (FDI) during Yushchenko’s term, which is a stark contrast to last year’s total of a mere USD 200 million in FDI. In short, Yushchenko inspired investor confidence in Ukraine.

The 2008 credit crunch crisis caused economic pain across the globe, but it was Viktor Yushchenko who emerged as one of the principal political victims. The severe economic downturn that followed in Ukraine played a significant role in his eventual defeat in the 2010 election.

In hindsight, it is clear that Yushchenko’s greatest single contribution was to popularize the idea of being Ukrainian. For the first time, it was fashionable to “think Ukrainian”, to be Ukrainian, and to proudly celebrate Ukraine’s heritage.

Some even refer to his time in office as the “romantic period” in modern Ukrainian history. They see it as a time when idealism mattered.

Yushchenko wisely discerned that a nation must know its history, honor its traditions, and preserve its culture. From the restoration of historical buildings to his success in transforming domestic and international awareness of the Holodmor, Yushchenko’s legacy will extend long after his lifetime. He has indeed planted many trees, “which will be of use to another age.”