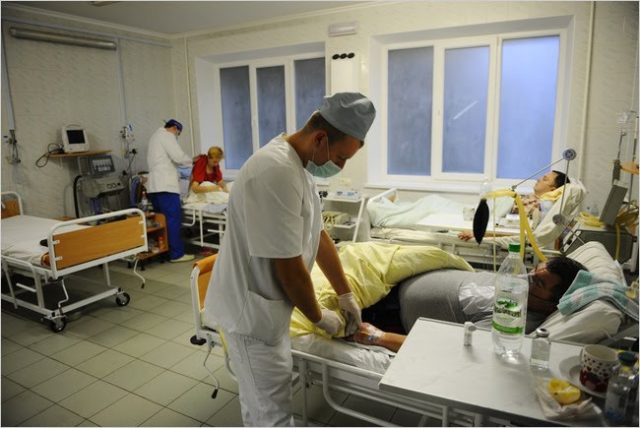 After the Verkhovna Rada (parliament) of Ukraine failed, on the last day of its July session, to approve health reform bill #6327, a vote on the second reading awaits approval by the legislature. Addressing the Rada, on September 5, Speaker Andriy Parubiy cautiously mentioned the bill, along with pension, judicial and education reforms (Rada.gov.ua, September 5). Yet, while the Rada members are struggling to reach a consensus, health reform is strongly supported by the public. Rating Sociology Service’s “Nationwide Benchmark Healthcare” survey, conducted July 26–August 2, 2017, revealed that the overall reform package #6327 is supported by 72 percent of Ukrainians (Rating Group, August 28).

Reformists, spearheaded by acting Health Minister Dr. Ulana Suprun, aim to fix Ukraine’s corrupt and malfunctioning system. The country inherited “free healthcare” from the former Soviet Union. But in reality, Ukrainians today pay for the majority of supplies and most treatment procedures. People are forced to bribe low-paid—and often unprofessional—doctors. Furthermore, Deputy Health Minister Oleksandr Linchevskyi noted that the Soviet-heritage healthcare system is seemingly war-oriented—hospital premises with excessive capacity were to be maintained for mobilization purposes. Nevertheless, this setup still turned out to be highly ineffective in 2014, when war broke out in Donbas (Tyzhden, July 28).

The proposed reforms will do away with inefficient and corrupt central and local government–allocated funding tied to physical facilities and hypothetical “patient beds.” The state has acknowledged that its resources are limited, and it shall guarantee only basic primary care, emergency medicine as well as palliative care. Government funding will be managed by a new Ukrainian equivalent of the British National Health Service. Ukrainians will choose their family doctors through personalized agreements in the E-Health online register (Moz.gov.ua, August 30). Prevention and sanitation centers will alleviate still-uneradicated tuberculosis and other periodic epidemics.

Ukraine has already demonstrated some success with healthcare reforms in recent years by eliminating corruption in state purchases of medicine. In particular, the Ministry of Health (MoH) organized international procurements of vital supplies (the program was adopted in 2015) through trusted third parties, including the United Nations Development Program (UNDP), the United Nations International Children’s Emergency Fund (UNICEF) and Crown Agents. The purchase of cardiovascular surgery stents, organized by Crown Agents in 2016, resulted in better quality stents at half the price, according to Deputy Health Minister Linchevskyi (Tyzhden, July 28). The total savings to the state budget over the previous year amounted to $26.8 million.

One active reform opponent in this second-tier group is Rada member Andrii Derkach (Derkach.com.ua, accessed September 13). Derkach has former ties to both the Soviet and then Russian security services, and he studied at the Security Academy in Moscow. He also allegedly did business with murky tycoons Semyon Mogilevich and Mikhail Cherny. And he is believed to have participated in questionable arms trade deals. Derkach is also known as a political party hopper: from supporting Kuchma’s “For a United Ukraine!,” to Viktor Yushchenko’s “Our Ukraine,” to the Socialist Party, the Party of Regions, and is now an independent member of parliament. Nicknamed the “Orthodox Oligarch,” Derkach has strong ties to the Russian Orthodox Church and was, in fact, seen until recently as a pro-Russian politician (Nacburo.org, January 6, 2016). An Anti-Corruption Action Center investigation linked Derkach to Dr. Borys Todorov. And allegedly, Derkach had lobbied for Todorov to be appointed health minister before Suprun received the job (Ukrainska Pravda, January 18, 2017).

Radicalization presents another major problem for adopting healthcare reform in Ukraine. Remarkably troubling was the involvement of the Confederation of Free Trade Unions (CFTU) in their “witch hunt” campaign against Suprun. The confederation, which benefited for decades from assistance programs funded by the United States government, went so far as to organize a protest at the US embassy on September 14, 2016, citing “the import of corruption,” and complained specifically about healthcare reform. In one of its letters to the MoH (seen by this author), the CFTU affiliate “Free Union of Medical Workers” accused the health ministry of “genocide,” “terrorism financing,” and “torture” of the Ukrainian people. Furthermore, CFTU protesters broke inside the ministry premises, threatening to occupy the offices on the last day of the parliament’s session in July (Gordonua.com, July 14). CFTU leader Mykhailo Volynets was a Rada member with Yulia Tymoshenko’s Bloc in 2002–2006, 2006–2007 and 2007–2012.

Further opposition comes from politicians and executives related to medical elites and those lobbying the pharmaceutical and the insurance industries. Exemplary figures in his group include the Verkhovna Rada Health Committee chair, Olha Bohomolets; former Minister of Health Dr. Oleh Musiy; and the head of the Institute of Cardiology, Dr. Borys Todorov. In their arguments, these figures tend to appeal to the protection of national assets in the health sector (Umj.com.ua, July 28).

But it is the aggressive criticism of the health reforms—and Health Minister Suprun personally—in the Russian media that truly stands out. An article posted on the website of the national television channel TVCattacked Suprun for being an American and a “granddaughter of a fugitive Ukrainian nationalist organization fighter” (TVC, January 27). According to a Russian-nationalist “think tank,” Suprun lobbies for organ transplantation and trains paramedics according to North Atlantic Treaty Organization (NATO) standards because the US views Ukraine as its “military range” (Fondsk.ru August 25 ). Another outlet raised the alarm about a supposed MoH cover-up of “secret experiments with pathogenic microorganisms at US bio-laboratories in Ukraine (Vzglyad, August 28).

Health reform has a decent chance to pass, despite the opposition and delays. Indeed, Ukrainians’ support for the reforms indicates a popular desire for change since the current healthcare system is broken. Polling indicates that 73 percent of Ukrainians even support a proposed co-pay system, which was recently excluded from the reform package in order to achieve a political compromise (Ratinggroup.ua, August 28). Ukrainian society clearly understands that healthcare is not free and is prepared to make sacrifices for the sake of reforming the medical system.