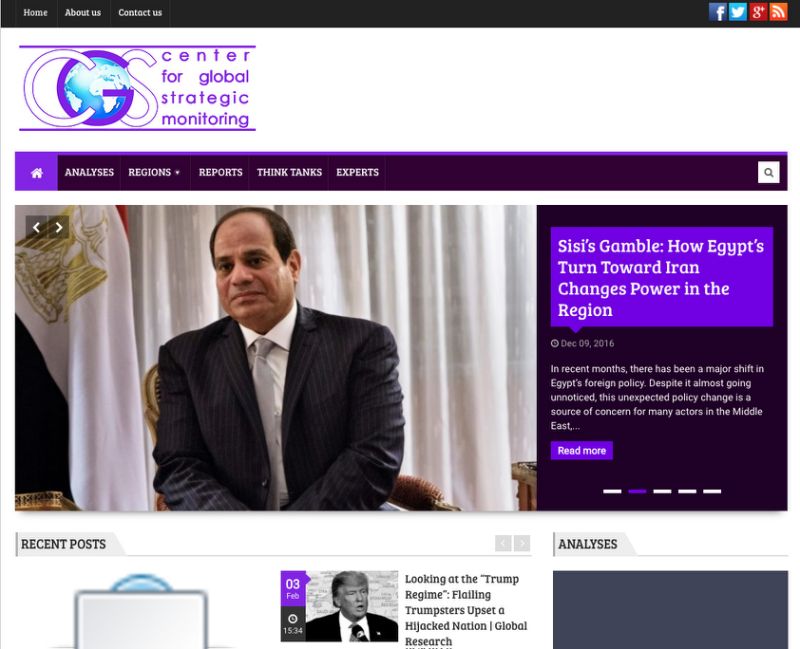 Bruce Riedel is a widely known expert on the Middle East who helped guide U.S. policy in the region as a member of President Bill Clinton’s National Security Council. So he was more than a little surprised recently when an obscure website ran an article about Saudi Arabia he had never seen before — with his byline.

Riedel wasn’t upset just because he hadn’t written the piece, which appeared under his name on the website of something called the “Center for Global Strategic Monitoring,” or CGS Monitor. The phony piece espoused views — about an alleged Saudi role in the 9/11 terror attacks — that he has publicly rejected.

“It was very disturbing,” said Riedel, now a senior fellow at the Brookings Institution, a prominent Washington think tank. “The article was entirely fictitious. This attacks the whole basis upon which our press works.”

In effect, Riedel said, the website had lifted his name and attached it to someone else’s opinions. “It’s reverse plagiarism,” he said.

It turns out Riedel wasn’t alone. Yahoo News has documented multiple other examples of phony advocacy and analysis pieces on CGS Monitor, appearing under the names of other well-known scholars who had never written them or even seen them.

“This is the first time I’ve been aware of anything like this,” said Paul Pillar, a former CIA national intelligence officer who now teaches at Georgetown University’s Center for Security Studies. He confirmed that he had nothing to do with an article that appeared with his byline — “Saudi Shadow on Orlando Tragedy” — on the CGS website last June. “I definitely did not write this. Obviously, it’s disturbing.”

Similarly, Matthew Levitt, a former FBI counterterrorism analyst who is now a fellow at the Washington Institute for Near East Policy, confirmed he was not the author of a piece that appeared with his (misspelled) byline last September about U.S. policy in Syria. Asked by a Yahoo News reporter for his thoughts on “what you think is going on here,” Levitt replied: “No idea.”

But others do. The strange appearance of CGS Monitor appears to be a new phenomenon in media manipulation, aimed at subtly spreading propaganda to unsuspecting news consumers — as well as undermining the “brands” and reputations of prominent opinion makers, according to Brian Mefford, a Kiev-based scholar at the Atlantic Council, who has been studying the website.

“The CGS Monitor … has taken fake news to new depths with its use of fake opinions,” Mefford wrote in a posting this week on the Atlantic Council’s website. “How do we really know who said what? Academics, scholars, politicians, and writers must now vigilantly manage their brand as a core part of their work. Your opinion, it turns out, may no longer actually be yours.”

Efforts by Yahoo News to contact CGS Monitor were unsuccessful. The website, like many, has a “Contact us” link. But emails to that address yielded no response. In the “About us” section of the website, CGS Monitor describes itself as “a nonprofit and nonpartisan research and analysis institution dedicated to providing insights of the think tank community publications” — a phrasing that suggests something less than total fluency in English. But there appears to be no public record of who CGS Monitor is affiliated with, who runs it or where it is located. It was anonymously registered in June 2015, using a URL that closely resembles that of the website of the Christian Science Monitor — a possible attempt to confuse readers, Mefford suggests.

While the origin of CGS Monitor is shrouded in secrecy, Mefford sees the fingerprints of the Russian government, a possible and — until now — unnoticed component of the Kremlin “influence campaign” that U.S. intelligence officials say was launched by Russian President Vladimir Putin’s government during the 2016 presidential election.

As evidence, Mefford notes that the website mixes apparently mainstream articles about world events from real experts (some of whom actually wrote them) with articles lifted from Russian state propaganda outlets such as RT and Sputnik. Other postings advance conspiracy theories that have popped up in Russian media, such as one last December suggesting a CIA connection to the assassination of the Russian ambassador in Turkey. Another — lifted from the same conspiracy minded website — advanced the idea that there was a “deep state” plot by U.S. intelligence officials and Ukrainian nationalists to undermine the Trump administration.

Mefford also sees other clues. He believes that the article that falsely identified Riedel as its author was not written by a native English speaker: The “improper placement of nouns and frequent lack of articles like ‘a’ and ‘the’ strongly suggests that it was translated into English by a native Russian speaker,” he wrote in his posting. “Anyone who has lived in the former Soviet Union recognizes that Russian speakers have difficulty knowing when and where to use English articles. Take these excerpts from the article, for example: ‘It is a shameful matter to support a regime in which women are not allowed to drive, and criminals are being beheaded like Middle Ages.’ Or ‘…why the authorities are insisting on having relations with Saudis?’”

But Mefford acknowledges these clues are not definitive — and there may be other suspects as well. The articles falsely attributed to Riedel and Pillar have a decidedly anti-Saudi bent. While the “Riedel article” links the Saudis to 9/11, the piece attributed to Pillar plays up reports that Omar Mateen, the gunman who perpetrated last year’s massacre at an Orlando nightclub, had made two trips to Saudi Arabia, arguing that such reports, “once again, introduce Saudi Arabia as the birthplace of terrorism.” That could point to Iran, Riyadh’s archenemy in the region, as the culprit — another suspect in what has become the latest media mystery story.

Next
James Bond is From Odessa