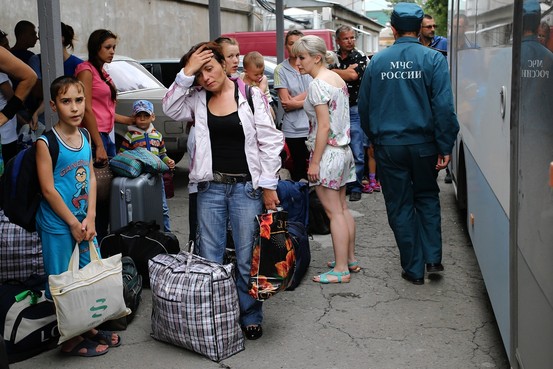 The State Duma of the Russian Federation passed an amendment to its citizenship laws, on July 12, easing the procedure for Ukrainians to acquire Russian citizenship. According to the new amendment, those wishing to acquire Russian citizenship would no longer need to provide Russian authorities with paper certification from Kyiv that they were abdicating their Ukrainian citizenship. Such a document was difficult to obtain. Under the new legal guidelines, an individual would need to only submit a notarized copy of the abdication application to the Russian Migration Service (Interfax, July 13).

On July 18, however, President Vladimir Putin rejected the proposed deeper simplification measures that would allow individuals not even resident in Russia to apply for citizenship (Kommersant, July 18). Presumably, the price tag for caring for the tens if not hundreds of thousands of expected new Russian citizens in occupied Ukrainian Donbas was too high for the Kremlin (see EDM, July 18). Nevertheless, the Duma’s aborted citizenship bill had every sign of a systemic campaign. And it illustrates the ways in which demographic decline trends are increasingly influencing Russian policies on a whole host of issues.

Easing Russian citizenship for Ukrainians from Donbas was initially “prompted” by a question for President Putin on his call-in show earlier this summer. And the policy was subsequently endorsed by Putin during his meeting with the governor of Belgorod Oblast, which borders on Ukraine’s Kharkiv Oblast (Lenta.ru , July 14). According to the interior ministry, “about a million people” were unable to receive the required abdication certificates from Ukraine in order to apply for Russian citizenship. And Duma committee chair Pavel Krasheninnikov suggested “hundreds of thousands” of Ukrainian residents of Rostov Oblast stood to benefit from the new law (Vzglyad, July 11)

This simplification of citizenship procedures was likely motivated at least in part by the Kremlin’s ongoing “crawling occupation” plans to grant Russian nationality to the residents of the Donetsk and Luhansk “People’s Republics” in Donbas. Moreover, the initiative may have been meant for domestic consumption in preparation for the 2018 presidential campaign. But in a longer-term perspective, the move seemed designed to address Russia’s looming “demographic gap” by encouraging culturally acceptable immigration from Ukraine.

Russian officials and experts both periodically acknowledge the demographic problem faced by Russia, aggravated by reduced and deferred fertility during the1990s, when the economy was in recession. Immigration accounted for 98 percent of Russia’s population growth of 262,000 people in 2016, which had been lower than the 2015 increase of 277,400 people (Vedomosti, February 22). Last year, Russia’s Economic Development Ministry called for a proactive migration policy to prevent future declines in the country’s workforce (RIA Novosti, October 29, 2016). And Putin himself admitted that demographic decline would lead to near-term recruitment problems for the military (RBC, November 22, 2016). Furthermore, according to political demography scholar Andrey Korotayev, it will not be possible to entirely prevent Russia’s depopulation—only to mitigate decline and aging. Korotayev argues the core of the problem dates back to the economic depression of the 1990s: from 1989 to 1993, the number of newly born babies declined two times and then stagnated until 1999. Furthermore, the post-Soviet Central Asian republics, which are the main source of migrants to the Russian Federation, experienced their own birth declines at the end of the 20th century—even more dramatic than in Russia (Lenta.ru August 9, 2016).

In theory, unlike the migrants from culturally different Central Asia, Ukrainians—who have a reputation for being highly adaptable—could be more easily integrated, thus making Russia’s overall population more homogenous. Generally, when applying for citizenship, Ukrainians can pass a Russian-language test without any difficulty. The war in Donbas has whet the appetites of some of Russia’s regional authorities for these potential immigrants. The governor of Rostov, for example, proposed to count Ukrainian refugee children in the oblast’s statistical reports to improve the region’s poor population record for 2015 (RBC, June 10, 2015)

But mobility statistics and public opinion polls cast doubt on the presumption that the simplification of receiving Russian citizenship status would actually increase the flow of Ukrainian Slavs to the Russian Federation. According to the Ukrainian State Border Guard Service (Data provided directly to author, April 26), the number of individual border crossings between Ukraine and Russia increased slightly in 2016 (11.6 million) compared to the previous year (10.9 million). But the overall volume and growth rate of these border crossings (+6 percent) was much lower than that with European Union member states (33.9 million in 2015; 37.2 million in 2016; +10 percent change). The introduction of visa-free tourist travel for Ukrainians and proactive politics in Hungary, the Czech Republics, Poland and some other EU countries to attract Ukrainian workers makes Russia a less attractive migration destination, especially during its ongoing conflict with Ukraine.

Some Russian media sources quote Russian statistical data that about 2.5 million Ukrainian citizens were in Russia as of January 1, 2016. Of those, 1.4 million had a temporary or permanent residence permit, including 0.4 million who were granted temporary refugee status. Yet, local attitudes toward the Ukrainian temporary refugees from Donetsk and Luhansk differ: quite often they are treated not as “Novorussians” but as “Ukrainians.” Notably, some of these refugees, especially in Crimea, are perceived as competitors for labor (Km.ru, March 1, 2017).

Russia is still the second-largest outward migration destination from Ukraine, after Poland. But it is becoming less attractive. An opinion poll from last February shows that the number of Ukrainians willing to work in Russia has declined by four times—only about 6 percent of those willing to work abroad name Russia as their preferred destination. And reportedly, many of these “target” Ukrainians would rather have both Russian and Ukrainian passports, especially due to the EU visa-free travel regime (Espreso.tv, March 15; Vzglyad, July 11).

Nevertheless, Moscow may still focus on legally absorbing the large number of Ukrainians temporarily residing in Russia without Russian citizenship. Governmental statistical data already includes the residents of annexed Crimea within Russian population figures, boasting demographic growth of 2.6 million “new” Russians in 2014 (Statdata.ruMay 17, 2017). Furthermore, the simplification of citizenship rules could help attract fresh talent. In the report “The Strategy for Russia. Russia’s Foreign Policy: end of 2010s–Beginning of 2020s,” the authors recommend an “active policy to attract valuable personnel [from Ukraine] to work in Russia [and] replenish [Russia’s] domestic human capital” (Svop.ru, May 2016). This especially concerns Ukrainian weapons and technology designers and engineers. Coping with multiple crises, the Ukrainian government is likely to face challenges in countering such “demographic operations.”